NCI (Non-Covalent Interactions) is a tool to visualize an identify non-covalent interactions, such as van der Waals interactions, hydrogen bonds, and steric clashes. The index is based on the density and its derivatives.

The reduced density gradient, which is calculated using the density and its first derivative, 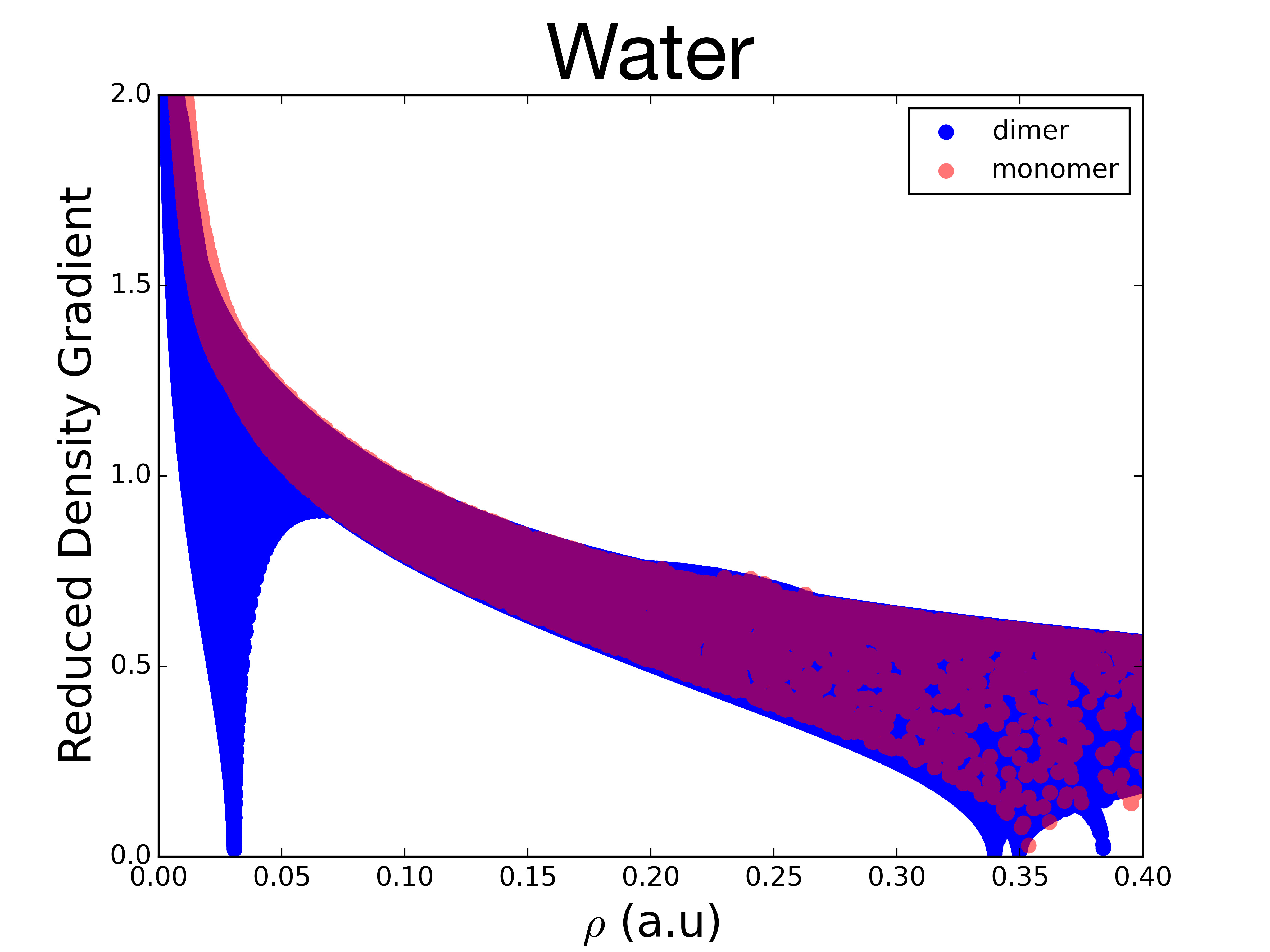 To determine the type of the interaction, the sign of the Laplacian of the density, \(\nabla^2 \rho\left(\mathbf{r}\right)\), can be used. To do so, the three eigenvalues \(\lambda_i\) of the Hessian (second derivative) of the electron-density are calculated \(( \lambda_1 \leq \lambda_2 \leq \lambda_3)\). At the nuclei, all eigenvalues are negative, since the density is at a local maximum. In covalent bonds, the Hessian has one positive eigenvalue and two negative eigenvalues \(( \lambda_1 < 0, \lambda_2 < 0, \lambda_3 > 0)\). On the other hand, in regions of steric clashes or strain in the interatomic region (as in bicyclo[2.2.2]octene and ring or cage critical points), the second eigenvalue will be positive. Therefore, the sign of the second eigenvalue of the Hessian, \(\lambda_2\), can be used to distinguish between bonded \((\lambda_2 < 0)\) and nonbonded \((\lambda_2 > 0)\) interactions. The strength of the interaction can be assessed by the density itself: higher density values at the location of the non-covalent interactions indicate a stronger interaction. For this reason, the NCI method relies on the inspection of the reduced density gradient versus \(\text{sign}(\lambda_2)\rho\left(\mathbf{r}\right)\) plots: 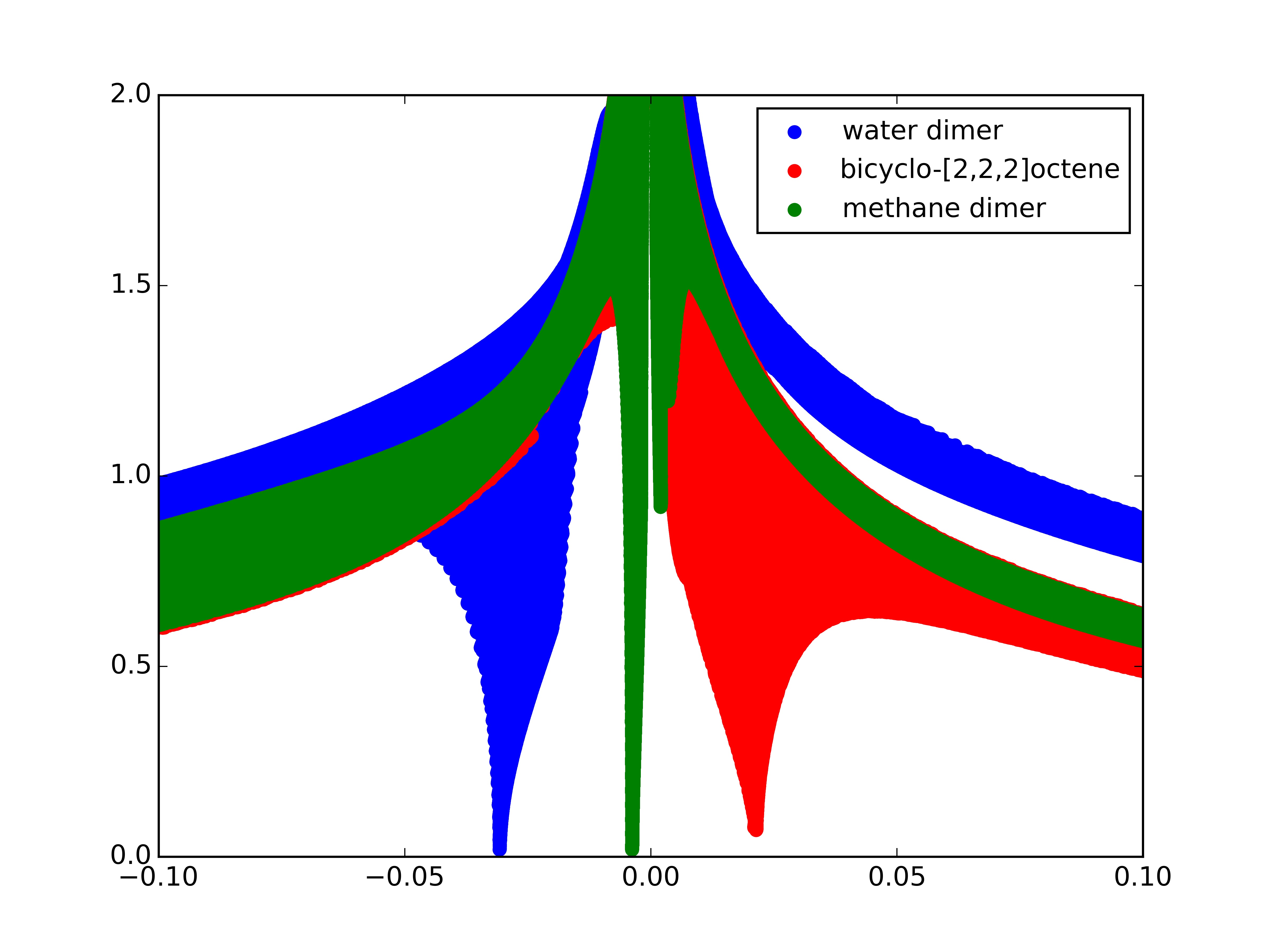 these plots can be obtained from ChemTools by using the .plot('filename') function of the NCI tool.

The water dimer shows a low reduced density gradient spike at negative density values, indicating the stabilizing hydrogen-bonding. The methane dimer spike is very close to zero, but still has a negative \(\text{sign}(\lambda_2)\), due to it’s weak attractive dispersion-interaction. Bicyclo-[2,2,2]octene, on the other hand, shows a spike at positive values due to the steric clash in the centre of this molecule.

To visualise the location of the interactions, the low reduced density gradient isosurfaces can be studied. The gradient isosurfaces are coloured based on the value of \(\text{sign}(\lambda_2)\rho\left(\mathbf{r}\right)\). Blue regions with large, negative values of \(\text{sign}(\lambda_2)\rho\left(\mathbf{r}\right)\) show attractive non-covenant interactions, such as dipole-dipole interactions or hydrogen bonding, while red, positive regions show nonbonding, steric clashes. Values close to zero indicate weak non-covenant interactions, such as \(\pi\)-\(\pi\) stacking and van der Waals interactions.

In ChemTools these plots can be generated with the .dump_files('filename') function. See the tutorials and example gallery for more details.

Add link to tutorials and example gallery once these are in their final form.